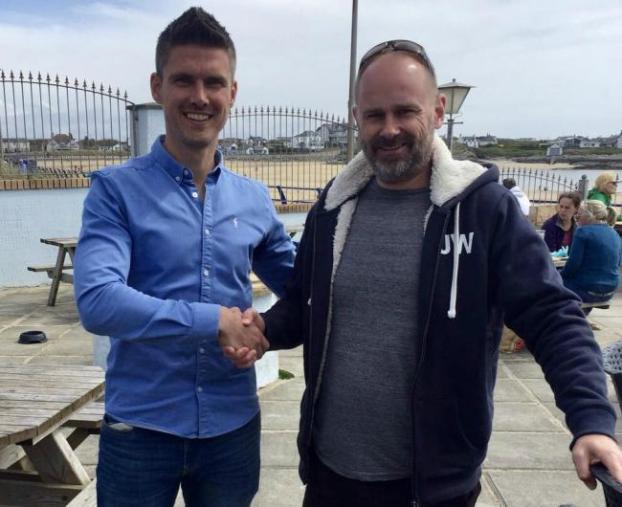 With preparations well underway for Anglesey to host The Inter-Games football tournament on the island in 2019, Ynys Môn’s team are delighted to announce that the vastly experienced Campbell Harrison will be taking the reins in the dugout for next summer’s competition.

Anglesey announced they’d be hosting the football-only competition last month, and the announcement of Harrison has followed swiftly afterwards, with the seasoned manager leaving his role at Holyhead to take charge of Ynys Môn’s side until the end of next summer’s tournament.

Ynys Mon 2025 Project Manager Gareth Parry, responsible for the island’s bid to host The International Island Games proper in seven years’ time as well as organising the 2019 football tournament, expressed his joy with the announcement of Harrison as manager.

“To appoint someone as experienced as Campbell as manager for the men’s football side going into next summer’s tournament is fantastic news for Ynys Môn and I’m delighted to be able to confirm the appointment today.

“Not only is Campbell a hugely experienced manager, but a lot of that experience has come here on Anglesey, as he has represented Ynys Môn himself at The Island Games previously as a player, and has spent a number of years managing at club level on the island too.

“Stepping down from his role as manager of Holyhead Hotspur, Campbell now has the capacity to fully commit to this role and he’s as keen as we are to make sure that we engage with all clubs and players on the island in the build-up to next summer’s tournament, to make sure we have the best squad possible at our disposal that represents all of what Anglesey’s footballing scene has to offer.”

A veteran of five Island Games competitions during his playing days, winning two silver medals and one gold medal as part of the Men’s Football team, Mr Harrison spoke of his pride and excitement ahead of undertaking the role.

“I am honoured to have been selected as manager for Ynys Môn Men’s Football ahead of the 2019 Inter-Games tournament, which will be hosted here on Anglesey.

“Having represented Ynys Môn at The Island Games previously in a playing capacity, I’m well acquainted with the standards and the demands of the game at this level and hugely looking forward to working with a fantastic group of players who will be just as driven as I am to make sure we do the island proud.

“Throughout my footballing career, I have worked hard to promote the development of the game here on Anglesey and I’m eager to visit all of the local clubs and players as soon as possible so that we can start assembling a squad which is capable of achieving great things in 2019.”