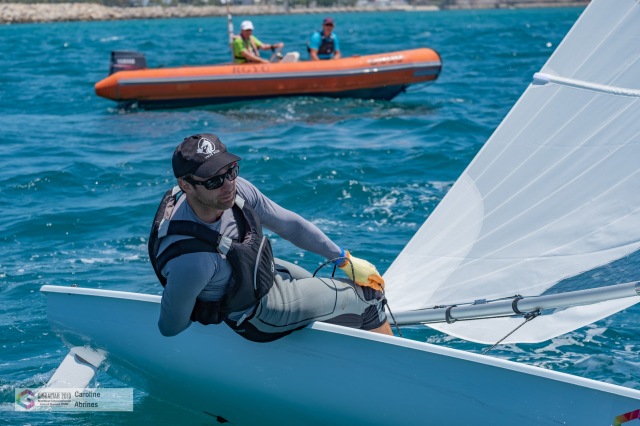 Day Four breezed by in no time, and with it Dominic Breen-Turner moved into pole position in the Laser Standard Rig Sailing Event ahead of the final day of the event tomorrow.

Finishing second and first in Races Six and Seven earlier today, Breen-Turner flew to the top of the event’s overall standings with 14 points, four ahead of Guernsey’s Andrew Bridgman and five ahead of Saaremaa’s Peeter Kaju with Races Eight and Nine to come tomorrow and Race Ten unlikely to take place after a race had to be cancelled earlier in the week due to weather conditions.

Over at the Clay Shooting Range Ynys Mon had four shooters in action – Dave Jones, Stephen Hays, Iolo Edwards and Alex Sainsbury – across two events and the quartet continued to show battle and develop throughout the day’s action. Jones and Hays finished 10th and 11th respectively in the Olympic Skeet Individual event, with Sainsbury and Edwards finishing 22nd and 26th in the Automatic Ball Trap Individual event.

Edwards and Sainsbury will be in action again tomorrow, with Timothy Garner and Michael Harrison competing in the Olympic Trap Individual Event – good luck to all of Ynys Mon’s shooters!

Places in the respective e finals proved to be just out of reach of the Ynys Mon swimmers on Day Four, after reaching six finals across Day Two and Three, but with so many events being contested thick and fast, the swimming team have done exceptionally well to compete in the way they have done and continue to match or beat personal bests in a host of disciplines.

In the Ten-Pin Bowling it was time for the Team Events as the Men’s and Women’s squads got back to the action throughout the day – their fourth straight day of non-stop competition! And what was very impressive, showing just how much the team have benefitted from being involved in the Games, is that personal bests were set throughout the day for both teams, so congratulations to them for all of their efforts.

It was quite the day in the Tennis event as well, as four fixtures took place for Ynys Mon’s players – two Doubles matches and a Singles match for both individual players. The Doubles started bright and early down at Bayside against the Faroe Islands and, despite carrying injuries, Dave Parry and Sean Myers won in straight sets to progress to the quarter-finals that afternoon, eventually falling to Menorca.

In the Singles Plate competition, Parry won in three sets against another opponent from the Faroes, and Myers won by walkover against Jersey – both have matches to come on Day Five.

It was a very busy morning up at the track for our athletics squad as Ynys Mon were represented nine times during the morning’s events.

Iolo Hughes booked a place in Friday’s 1500m Men’s Final with a superb second-placed finish in his semi-final – with the third-best time overall!

Zach Price stormed to first place in his Men’s 100m Heat to book a place in the semi-final tomorrow, with Cameron Jones also qualifying for the semis with a fourth-placed finish in his Heat – well done to both!

Ffion Roberts continued her good form on the track by progressing to the 200m Women’s semi-final with a third-placed finish in her Heat. Catrin Jones also ran well in the 200m Women’s event but just missed out on a place in the semi-finals after a fantastic run from her.

Shon Evans and Guto Tegid just missed out on places in the Men’s 400m Final after two great runs from them, and Cameron Lawrence put in a huge performance in the 1500m Men’s event, but unfortunately couldn’t quite make the final.

Rounding off the day’s track action was Aled Jones in the 5,000m Men’s Final and he put in a massive effort to finish in the middle of a very competitive field, rounding off a great day of action up at Lathbury.

Over in the Men’s Singles Badminton Event, Ynys Mon’s last man standing Mathew Rankenhohn fell in straight sets against one of the top seeds from Jersey, but a very tight second leg could have gone either way (Jersey taking it 21-19) and had that gone differently then a deciding leg could have been very interesting.

Hannah Evans, Lowri Jones, Yvonne Matthews, Sion Matthews, Morgan Shaw and Hannah Lloyd competed in the plate competition, with the highlight being Lloyd’s win over an opponent from the Western Isles to secure a place in tomorrow’s quarter-finals.

There was no Cycling event today, with both Men’s and Women’s squads taking a well-deserved rest after their gruelling Time Trials, but tomorrow (Thursday) the Road Race takes place where Ynys Mon will be in action again.

Good luck to all of the Ynys Mon competitors, and those from other islands, as the Games progress to their penultimate day!

For a full list of results and times, head over to www.gibraltar2019results.com, where you can find records, schedules, fact-files and all sorts of information about the various events and get all the latest official results as they come in.

This entry was posted in Uncategorized. Bookmark the permalink.